Nature creates its own art.

Walking along a Cape Cod beach, the tide was
ebbing and in the process formed these two perfect
impressions of trees.

What is striking about these impressions is the sense
of majesty and intricacy of the designs.  One can imagine coming upon exact replicas of these trees somewhere in the world.
Posted by: Peggie Strachan at 1:05 PM 3 comments: Links to this post

WHAT IS YOUR IMPRESSION 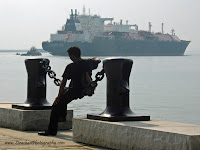 "To understand any living thing, you must, so to say, creep within and feel the beating of its heart". -- W. MacNeile Dixon, poet, historian, scholar of the English language.
While waiting to board a boat out of Boston Harbor I noticed this young man wandering around the waterfront.  As soon as this ship appeared he sat on the thick black chain and watched the ship until it vanished into the open waters of the Atlantic.
I wondered what brought the young man to the waterfront, and in particular what fascinated him about the ship.  He didn't board any of the boats leaving the harbor, and he was still on land when my boat left.
What is your impression?
Posted by: Peggie Strachan at 10:21 AM 1 comment: Links to this post

THE AFTERNOON I WORKED FOR A CATBIRD & LEARNED NATURE PATIENCE

Ralph Waldo Emerson wrote, "Adopt the pace of nature, her secret is patience". 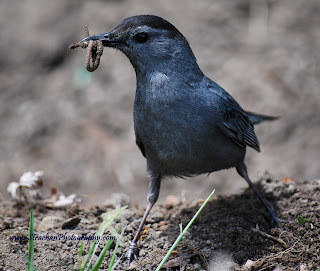 With the intention of moving an azalea bush from one garden to another, planting a butterfly bush in its place, and weeding two extremely neglected gardens, I began what I thought was a 'solitary effort'.  Pitchfork in hand, I attacked weeds that had sprouted and spread unrestrained.
Approximately 10 minutes had passed when I noticed this little gray catbird.  It seemed to be hanging around, watching what I was doing.  I stepped back from the garden, looking at the catbird with curiosity.  Seizing the opportunity, it hopped onto the overturned dirt, grabbed several bugs and worms, and then flew away.  Laughing to myself, I resumed working.  The catbird returned within minutes!  I stood back; it hopped right into the freshly turned dirt, grabbed more bugs and worms, and flew off.  This continued over and over for quite some time.
I took a break before starting to dig out the azalea bush.  What did the catbird do?  It flew up onto the handle of the pitchfork, looked at me, and chirped, as if to say, "Hey get back to work, I need more food!  There's no slacking off!"  I actually answered it, out loud, "I'm doing all the work, you're reaping all the benefits, and I need a break!"  Oh yes, I talked to the catbird quite often that afternoon, and realized I had become its employee.  This was one smart bird!
Since my new 'supervisor' didn't allow breaks, I immediately began digging up the azalea, creating quite a large pile of dirt.  The catbird stayed close, watching me with its ever vigilant black eyes.  Every time I stepped away, it hopped right onto the pile, scooped up the bugs and worms, and flew away.
Freeing the azalea I carried it to the other side of the house, and started to dig a large hole.  The catbird followed me!  I'm sure it was thinking, "Ah, a new food source!"  This little catbird was one persistent, bold and courageous bird, at one point coming within two inches of my feet.  I continued to dig.  I would step back.  It would grab food.  It would fly off.  It would return.
Having never experienced this type of interaction with a bird, I was fascinated.  I watched as it went after small bugs, watched as it deftly picked bugs right off the cement foundation of the house, and watched as it grabbed worms, maneuvering the worms with its beak into tight loops making them easier to carry back to the nest.
The gardening I had planned to do should have taken about two hours.  It took over four.  I didn't mind.  I was delighted to become the employee of the catbird; together we worked hard so it could feed its family.  I was permitted to participate in and observe the beauty that is nature; and in the process I learned "nature patience":  I learned to slow down my 'human' pace and observe the world around me.
For more information on catbirds (Orpheus Carolinesis, Linn., dumetelle carolinesis) visit the Audubon Society's website.
Posted by: Peggie Strachan at 3:05 PM 2 comments: Links to this post