When I visit a cemetery I often think about how each and every person in the cemetery has stories to tell.  Think about it, think about how they all were born, and lived their lives.  What are the stories they could tell.  I would imagine they are fascinating.

On a recent drive through Mt. Auburn Cemetery in Cambridge, MA, that very thought came to mind.  All the departed souls whose stories we will never know.  There are both the famous and the unknown resting within the peaceful grounds of the cemetery.

Henry Wadsworth Longfellow shared with the world his beautiful prose, such as:  Paul Revere's Ride, Evangeline, The Wreck of the Hesperus, The Song of Hiawatha.

Fanny Farmer's modest headstone, a boulder surrounded by ivy, does not tell the story of this widely popular woman who wrote America's best-selling cookbook in 1896, The Boston Cooking-School Cook Book.

This is the headstone of Edwin Booth, yes, that Booth....he's the brother of John Wilkes Booth, who shot President Abraham Lincoln on April 15, 1865 in Ford's Theater.

Edwin Booth was an acclaimed American Shakespearean actor who founded Booth's Theater in New York.  Some even say he was the greatest Hamlet on stage.

The above are just three of the many well-known that we do know a lot about, but not everything.  No one ever knows all.  But, what about the not so famous that are buried in Mt. Auburn. What are their stories, their tragedies, their achievements, their everyday life.  Those are the voices and stories I wonder about. 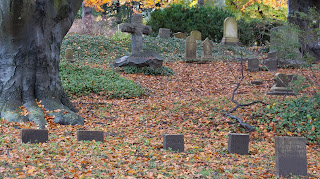 Ward Thoron's headstone is at the bottom right in this photo.  He was a lawyer, born in New York, lived in Washington, D.C., and ultimately settled in the Boston area later in his life.  He apparently sailed to Europe once a year, mostly alone, sometimes his wife would accompany him, and later his son or daughter.  What would he have told his of his life.

Mt. Auburn is a beautiful cemetery, if that can be said at all about a cemetery.  It is peaceful place, with rolling hills, dotted with headstones, monuments, crosses, mausoleums, and a majestic chapel.  What are the stories that we have missed hearing from all those who lie within the gates.